Yogmata is the first female Siddha Master (Samadhi Yogi / Himalayan Great Saint) in history. One of only two Siddha Masters who appear in public today. She is the Legitimate heir of the Himalayan secret teaching, which has 5000 years of tradition and is the source of both Buddhism and Christianity. In 1986, she encountered the legendary Himalayan Great Saint, Hari Baba. After which, in the hinterlands of the Himalayas at altitudes over 5000 meters, she underwent ascetic training that went beyond death. Eventually, she attained the final stage of Samadhi (supreme enlightenment) undergoing a long period of oneness with the Godhead and achieving ultimate truth.

Yogmata conducted public Samadhi 18 times between 1991 and 2007, in various regions of India, for world peace and to demonstrate the truth, and is respected throughout India for her achievements.

She received the title of Great Master, “Mahamandaleshwar” from “Juna Akara” the largest spiritual association in India. She has given sermons and blessings in Japan, the US and Europe to share universal love and wisdom. She also initiates the secret of mediation, at a Diksha, leading people to true happiness as well as receiving high dimensional energy. In Japan, she provides training courses and meditation retreats for true happiness and enlightenment; guiding people to develop their consciousness as well as their abilities.

Books:
“You Know the Answer” “Himalayan Saint’s Words to be the Sun” Kawade Shobo Shinsha.
“Life Beyond Expectation is Waiting Right There” Daiwa Shobo
“Love and Wisdom: Connecting to the Universe” Kodansha
“The Road to Enlightenment: Finding the Way Through Yoga Teaching and Meditation” Kodansha USA etc. 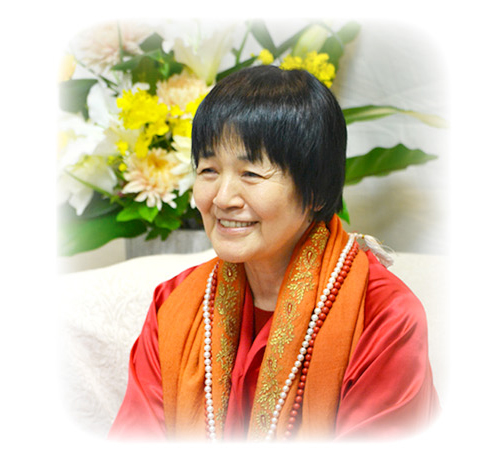